For the entire transfer window it has been evident that Arsenal are keen on a winger, predominantly one that can play on the right. Their chase for Raphinha was well documented, and ended in tears as the Brazilian agreed terms with Chelsea in a shock news story, before eventually moving to Barcelona and completing his dream transfer.

Since then, the club has been pretty quiet about their Plan B, with fanmade rumours surrounding Serge Gnabry, Leroy Sane and Pedro Neto surfacing online. A more credible link has risen however, from the Yellow Submarine in Spain, and that is Villarreal’s 19 year-old Yeremy Pino.

Who is Yeremy Pino? The youngster managed 6 goals and 4 assists last season in Spain for Unai Emery’s side, creating 6 big chances and managing 0.8 key passes per game in the first division. Those of you who aren’t avid followers on La Liga may not be aware of him, or maybe you haven’t seen enough of him to formulate a strong opinion or expectations of him in the event he does arrive at N5.

So, to save yourselves from watching highlights or rewatching hours of footage of him last season, allow me to walk you through Pino’s Champions League performance at Old Trafford last September, one of his big standout showings of his Villarreal tenure.

Pino started on the right wing for Villarreal, alongside the experienced Paco Alcacer up front and the crafty Arnaut Danjuma on the left. Dani Parejo and Juan Foyth provided support for the teenager in midfield and defence respectively. It was only his second ever Champions League appearance, but would be his second time facing the Red Devils, after emerging victorious in the Europa League final.

We can see Pino when Man United passed the ball to the goalkeeper for the first time. He occupies a regular right wing position, close to United’s left back, Telles. He caused trouble for Telles frequently throughout the game, and showed bright sparks down United’s left hand side. For (mostly) the wrong reasons, we’ll see a lot of Alex Telles today.

Here, 24 minutes in, Pino starts to get a flavour of the game. Parejo switches the ball crossfield to Pino, who controls it with his chest, before beating Telles and getting his shot off. His starting position is wide, wider than the left back, and he is isolated out of all the Villarreal players on the right hand side. This is similar to Saka’s starting position when the ball is switched to him, and mirrors scenarios where most of Arsenal’s players occupy one flank, and draw their shape towards that area, before switching quickly to the other, and giving the wide player, predominantly the right winger, more space to operate in.

The space Pino appears in forces Telles to commit to him, and his ability to touch the ball into a favourable position means that Telles has now been dragged out of position, giving him time to get his shot off. The shot was high and off target, but created a useful opening for him through quick thinking and near-perfect execution of a common tactic.

Some defensive work here, Pino and Foyth seem to have a good relationship down the right, here Telles carries the ball and passes to Sancho, and continues his run. Pino tracks back and follows him, covering for Foyth, who commits forwards and sticks with Sancho, preventing a possible opening for the left back. As seen in our game against Palace, right wingers tracking and supporting the right back, as opposed to being heavy pressers like the rest of the forward players, is a key part in Arteta’s defensive set-up. Pino ranks in the 99th percentile for blocks, 76th for tackles and 72nd for interceptions per 90 out of attacking midfielders and wingers in Europe’s top 5 leagues (fbref). 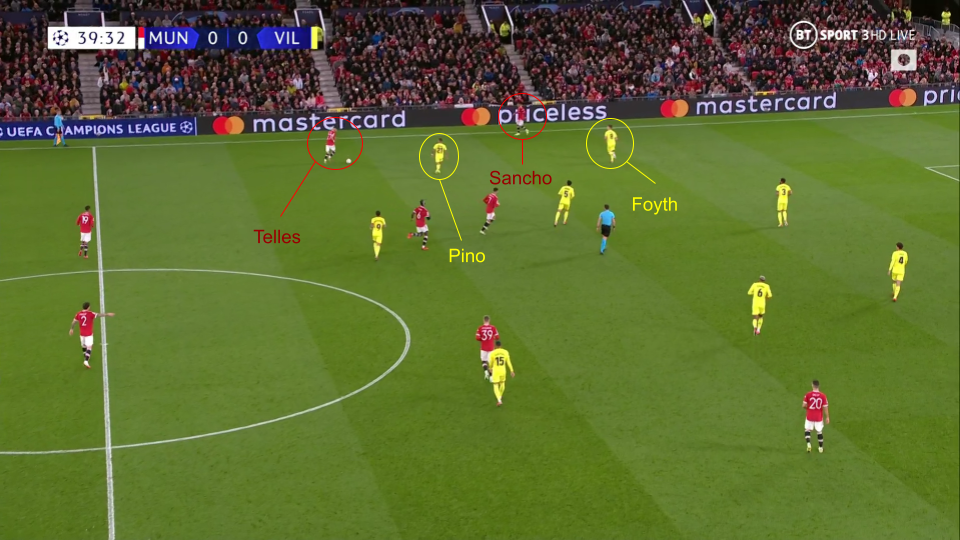 As Villarreal attack at the end of what has been a promising half, Trigueros passes to Pino in the box, who is faced with a 1v1 situation with Telles. Telles angles himself so Pino cannot make easy progression towards a shot, forcing Pino to continue his run forwards, which would lead him to the byline. As Telles commits, Pino switches his direction and cuts inside, completely cutting him out of the game and forcing de Gea into making a save after letting a low driven shot off with his left foot. Neat play by the right winger. 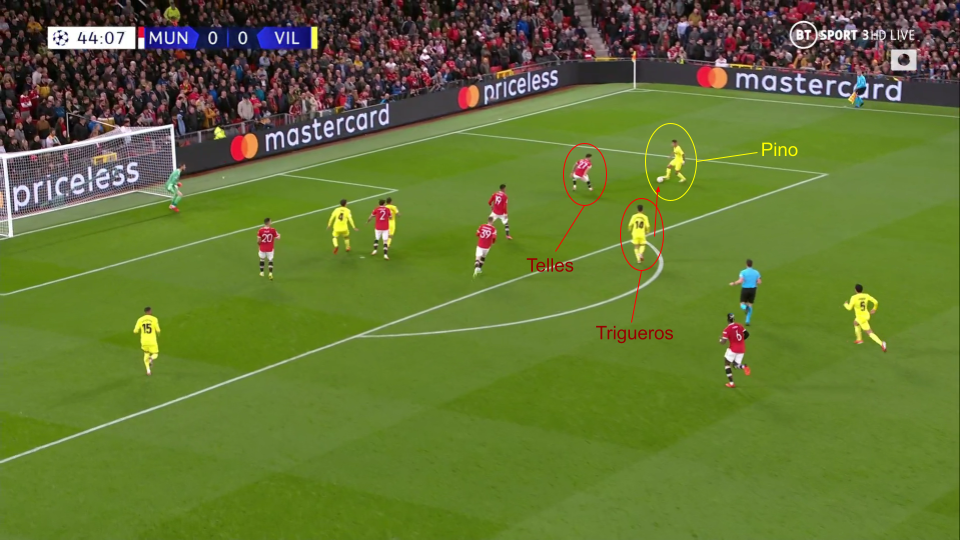 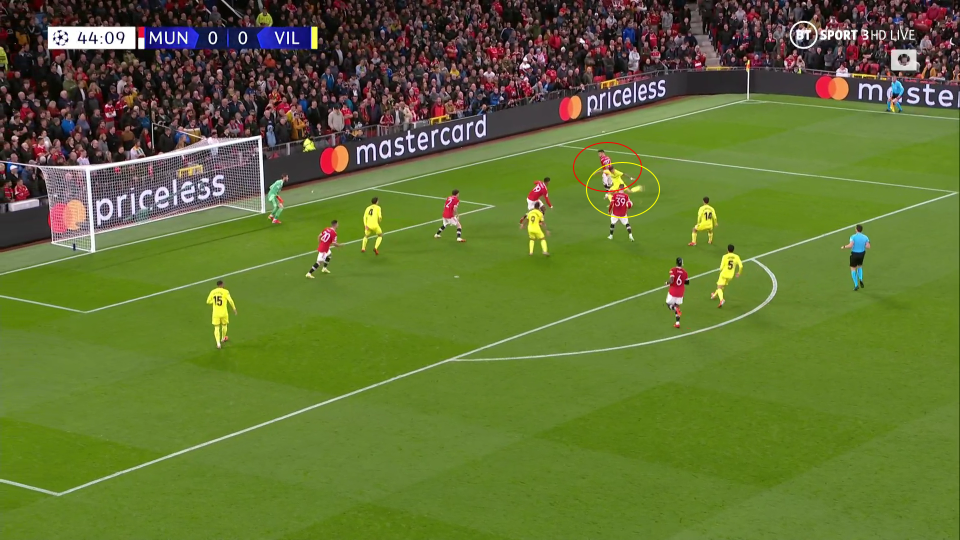 Second half, for Alcacer’s goal, Pino made a back post run, so if Alcacer didn’t reach it, he could tap it into the net. Saka is yet to add this to his game in abundance, and can prove a useful tool to have when in transitions. Heavily reduces the chance of a missed goal scoring opportunity and reduces how many defenders can surround certain players in the box to prevent the goal. 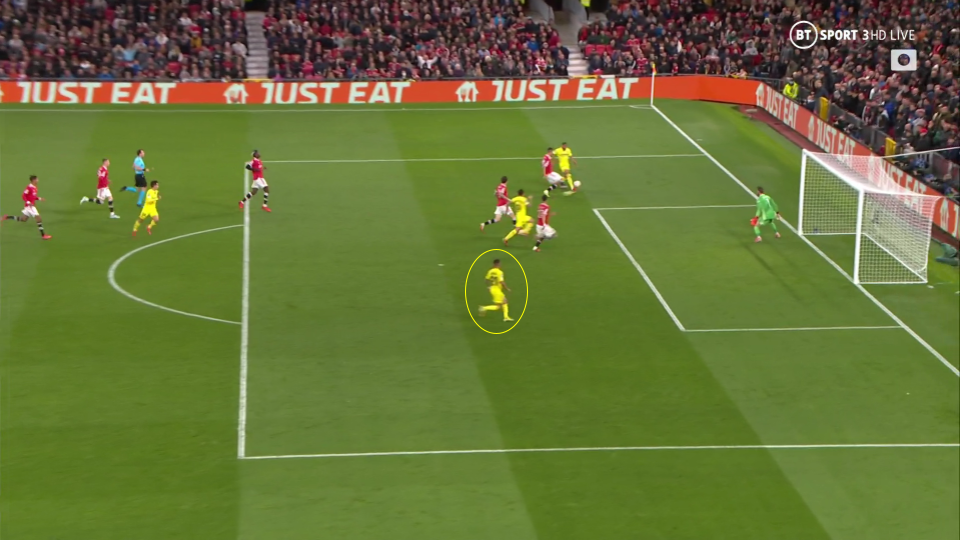 Much quieter second half from Pino overall, but here we see his willingness to run off the ball. Foyth doesn’t slip him in, but he finds a good empty pocket in United’s defence and occupies it as Villarreal progress up the field. With superior linebreakers, like those at Arsenal, he may well have been through here and had a clear chance at goal. In short, he can play a role on the inside as well as on the outside.

Parejo passes to Pino, who receives the ball and attacks the space indicated by the arrow, curving his dribble to the left, towards his goal, dragging Pogba, Sancho and Telles with him, before slipping in Dia, whose touch let him down. His ability to attack space and then immediately break lines and spot a teammate is impressive, and shows his ability to weave in and out on the right hand side, occupying both halfspaces and wide positions, therefore highlighting the flexibility of his game.

Pino’s quick release when receiving the ball baits a foul by Alex Telles here, who receives a yellow card in the process. Despite his goal, for most of the game Pino had the better of the Portuguese, and this would be Pino’s last meaningful contribution before being substituted seconds later. 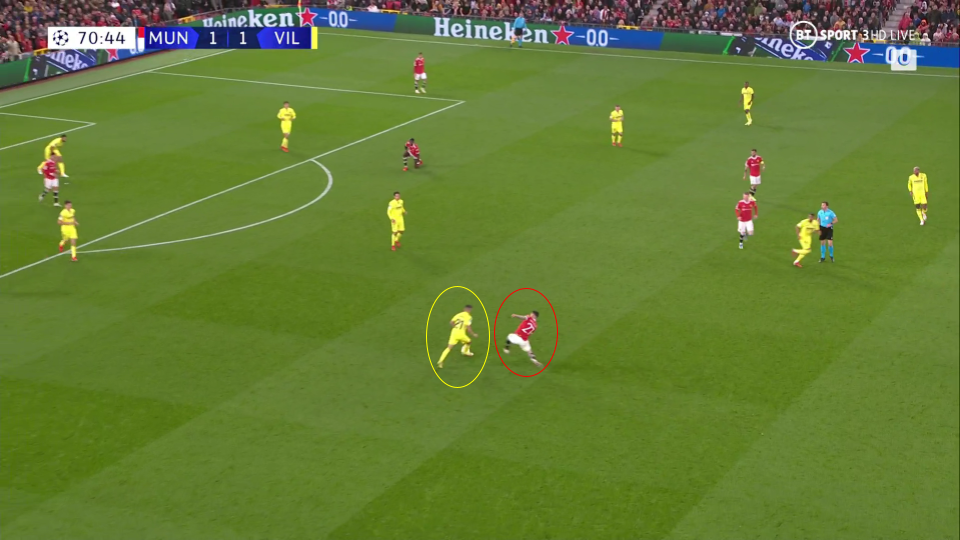 Villarreal lost 2-1, with a classic late Ronaldo goal, but Pino’s performance was certainly entertaining and eye-catching to a viewer, and demonstrated the talent the teenager possessed even on the biggest of stages. He managed 2 shots, with 1 on target, completed 6 out of 7 attempted dribbles, won 7 out of 11 duels and managed a key pass. No goal contribution from him but he presented to those interested what he has to work with.

He’s not the finished product, his pressing looked erratic at times, and gave away a foul whilst receiving a booking for a clumsy challenge, but he has very good technical fundamentals and possesses the skill to think quickly in tight situations in order to dispose of his competitors. If he is to be the “mystery winger”, he seems like a useful addition to complete Arsenal’s artillery for the season.