Arsenal travelled to Selhurst Park to face Patrick Vieira’s Crystal Palace for the opening game of the 2022/23 Premier League season. Despite a flawless preseason campaign for Arsenal, winning each of their fixtures, the Eagles always pose a threat. They are seen as Arsenal’s “bogey team” so to speak, with the Gunners failing to beat them on seven out of the last eight occasions they have faced each other. Therefore, Arteta and Arsenal saw this match as a big challenge; they had to get their setup perfect.

In this article, I plan to outline and explain how Arsenal set up tactically; showcasing how they shaped up both in and out of possession, as well as explaining the fine details which helped Arsenal pick up the three points under the lights.

Arsenal looked to build in a 2-3 shape, with Partey as the lone number six just ahead of Saliba and Gabriel to form a triangle. White and Zinchenko stayed high and wide, with Odegaard and Xhaka ahead of Arsenal’s defensive midfielder.

Crystal Palace attempted to isolate half of the pitch in their press before going man to man in an attempt to win the ball, before using their wide outlets to spring an attack. To combat this, Xhaka would drop into a pivot with Partey in order to create a numerical overload helping the gunners retain possession.

In possession, Arsenal would alternate between a 2-3-5 and a 3-1-6 shape, mainly dependent on the left side of the pitch, in particular, Martinelli and Zinchenko. 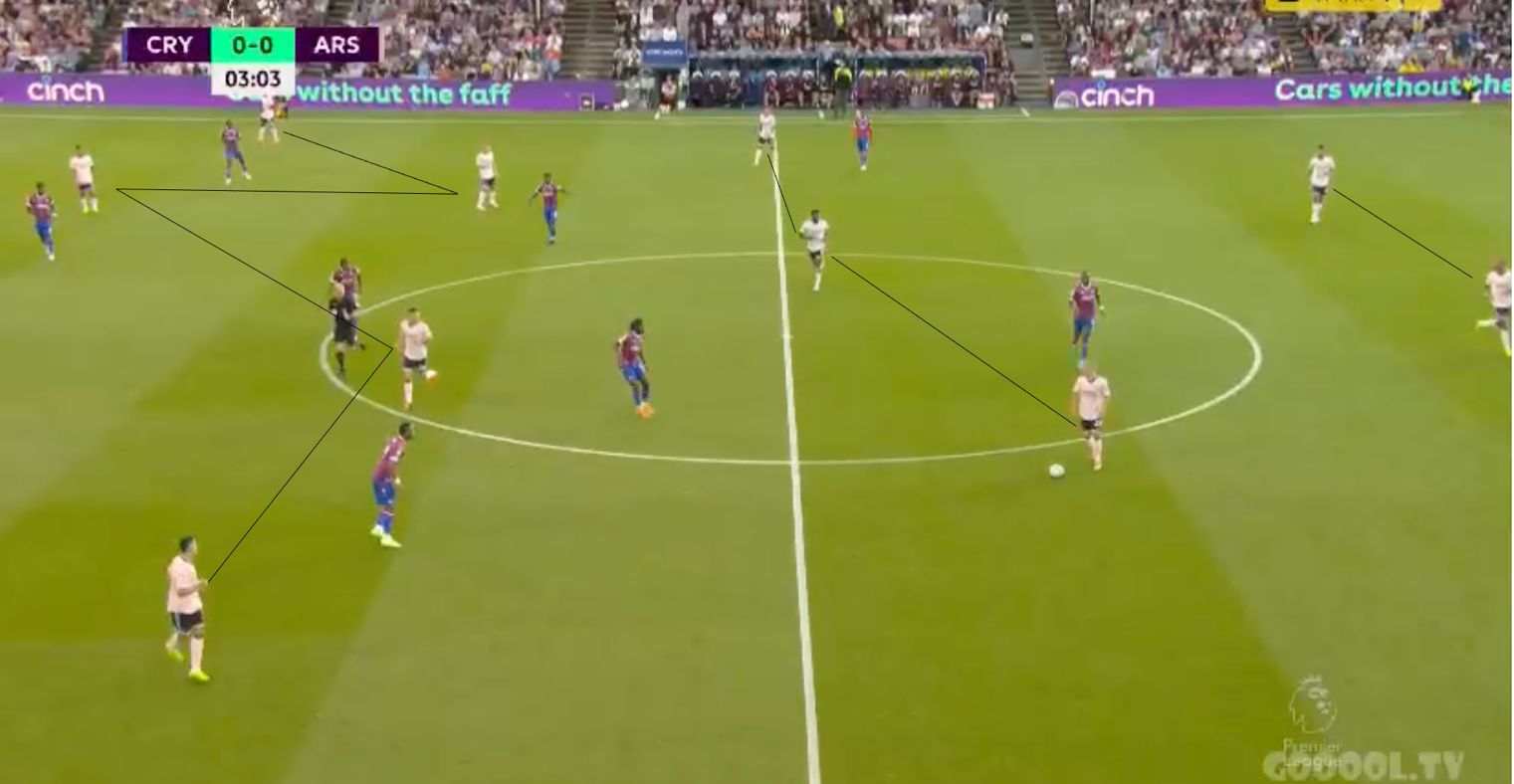 In this instance, Arteta had Arsenal in a 2-3-5 structure, with Martinelli dropping deep to receive the ball with Odegaard, Jesus and Saka available for a potential switch, forming a numerical advantage off the ball on the right side of the pitch. Instead of a direct switch, Zinchenko played the ball into Partey who then passed it to Jesus’ feet. Despite then losing the ball, Arsenal maintained the overload on the right side of the pitch, helping them win the ball back. This was then followed by Jesus’ showcasing some world-class footwork on the edge of the box before laying it off to his Brazilian teammate for what, on another day, would’ve been the opening goal of the game. 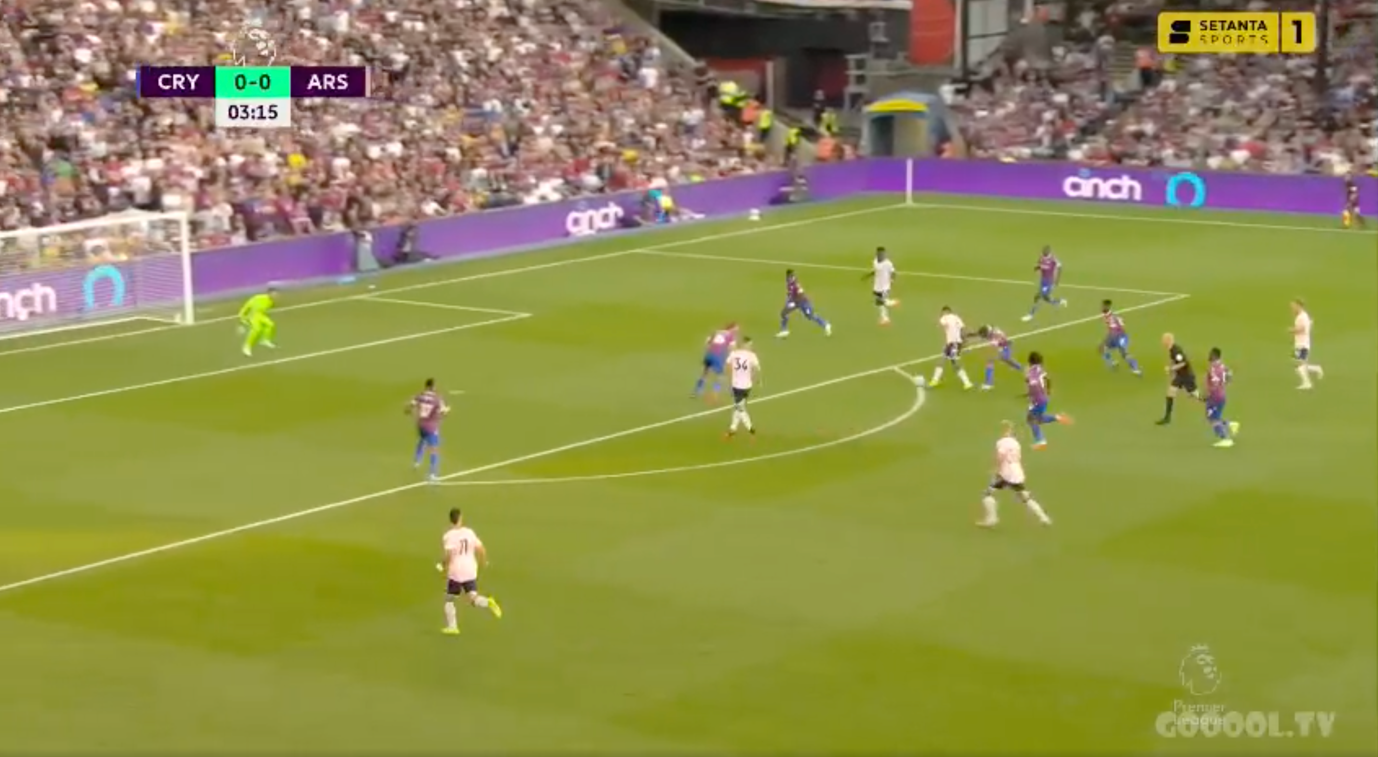 This was not the only shape Arsenal had in their locker. With Martinelli often tucking in to form a strike partnership with Jesus, Zinchenko would stay wide on the touchline to offer an out ball. Furthermore, White would tuck into a back three shape to form a 3-1-6 shape.

Out of possession Arsenal had baseline pressing principles which were flexible based on the position of the ball. On occasions, we’d see Arsenal’s typical 4-4-1-1/4-4-2 press shape. However we also had another pressing structure up our sleeve. Something Arteta showcased in preseason was having Martinelli tuck in to form a front two with Gabriel Jesus. Arteta, for certain periods in the match, trusted Martinelli with the responsibility of pressing two Palace players, Clyne and Andersen. With Andersen being Crystal Palace’s best long passer in the first phase, Vieira set up his side to find Andersen in order to spray those long balls in behind Arsenal’s midfield, completing 12 out of his 21 long balls on the day. This space in behind cost Arsenal control of large periods of the game. Arteta noticed this and would deploy Saka slightly deeper in order to help White deal with the threat of Wilfried Zaha.

With that being said, you may be asking why Martinelli was given the responsibility of pressing two players? Well, seeing as Andersen was Palace’s main ball progressor, Arteta preferred having an extra player deeper in order to win second balls through numerical overloads. Arsenal did this very well for the first thirty minutes or so, before dropping slightly in intensity.

If Palace managed to beat the first line of the press, Arsenal would set up in a 4-4-2 midblock with Odegaard and Jesus forming the front two and Xhaka and Partey making up the midfield pairing (White is in line with the back four off screen).

Though intensity dropped as the game endured, as can only be expected in the first game of the new season, we saw snippets of Arteta’s masterplan – a well-oiled pressing unit, and the infamous 2-3-5. Expect to see these tactics throughout the season.

One thought on “Crystal Palace vs Arsenal: A Tactical Breakdown”