After winning both of their opening matches, Mikel Arteta’s gunners travelled to the South coast for a Saturday evening Kick-Off to face Scott Parker’s Bournemouth. Prior to this match, the Cherries had, for their standards, a respectable start to the Premier League season. This included an opening day 2-0 win over Aston Villa followed by an inevitable thumping from Pep Guardiola’s Manchester City on the cityzens home turf. With Bournemouth having arguably the weakest squad in the division, Arsenal knew their opposition would have to impose themselves physically by sitting deep and relying on Kieffer Moore to win knockdowns in order to bring his fellow teammates into the game to create chances.

Despite this potential threat, Arsenal were strong favourites and came out 3-0 victors with two strikes from Martin Odegaard in the first half, followed by a peach from young centre-back William Saliba in the 2nd half to take the sting out of any chance the Cherries had of getting a result from this fixture.

In this article, I will point out key moments in the match for Arsenal: what went well and what they potentially could look to improve on going forward. I outlined the Gunners’ blueprint in my first article on Arsenal’s game week one fixture away to Crystal Palace.

In the first half Arsenal and Norway captain, Martin Odegaard, scored two goals and put Arsenal in cruise control. While the first goal involved some world-class footwork from Arsenal’s number nine, I have chosen to discuss the 2nd goal of this half as I feel it highlights areas the Gunners have needed to improve on and finally seemed to have done so. For the first two game weeks, while still impressing, Saka has yet to register a goal or an assist. While this should not be a worry for Arsenal fans, if you paid close attention, you would know why. Saka has played his best football with Tomiyasu or Cedric at right back because of the overlaps they offer. It is no secret Ben White is unnatural in this role, featuring for Brighton a handful of times in this role two seasons prior. Off the ball, he has struggled to make the right runs at the right times thus far, which often saw Saka be a little quieter than his usual self and often having the responsibility of two players whilst in possession. Not only did White’s overlaps help Saka play with more freedom, but it also was crucial to the first goal. Saka created elite separation with the fullback, allowing White the time to offer an overlap and play a ball into the feet of Jesus, before Odegaard took responsibility by making a predatory run on the end of Jesus’ first touch to smash it into the net of Mark Travers: something typically uncharacteristic of Martin Odegaard. 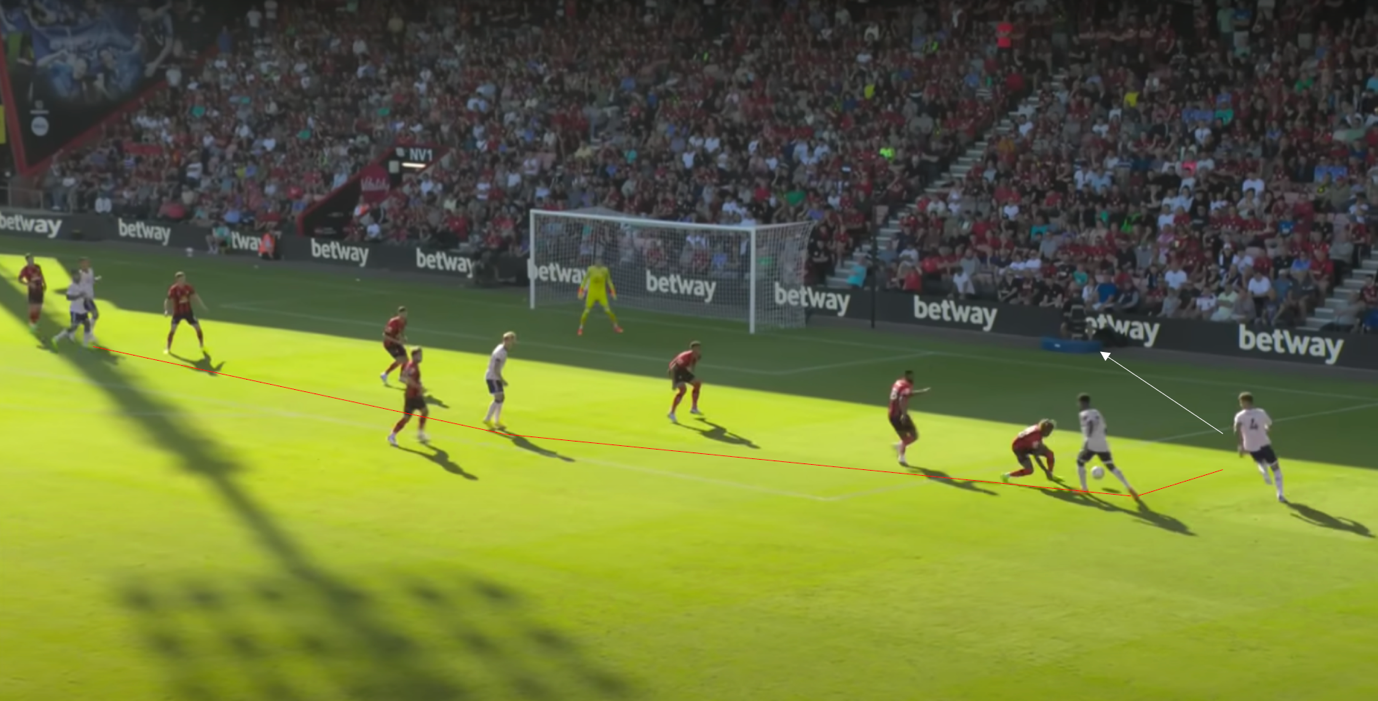 In this instance, Arsenal had six men forward, showing how ruthless they can be in the final third: using Saka as an outlet to create separation with the Bournemouth fullback and allowing players to make runs beyond him and into the box. He was key to this goal. 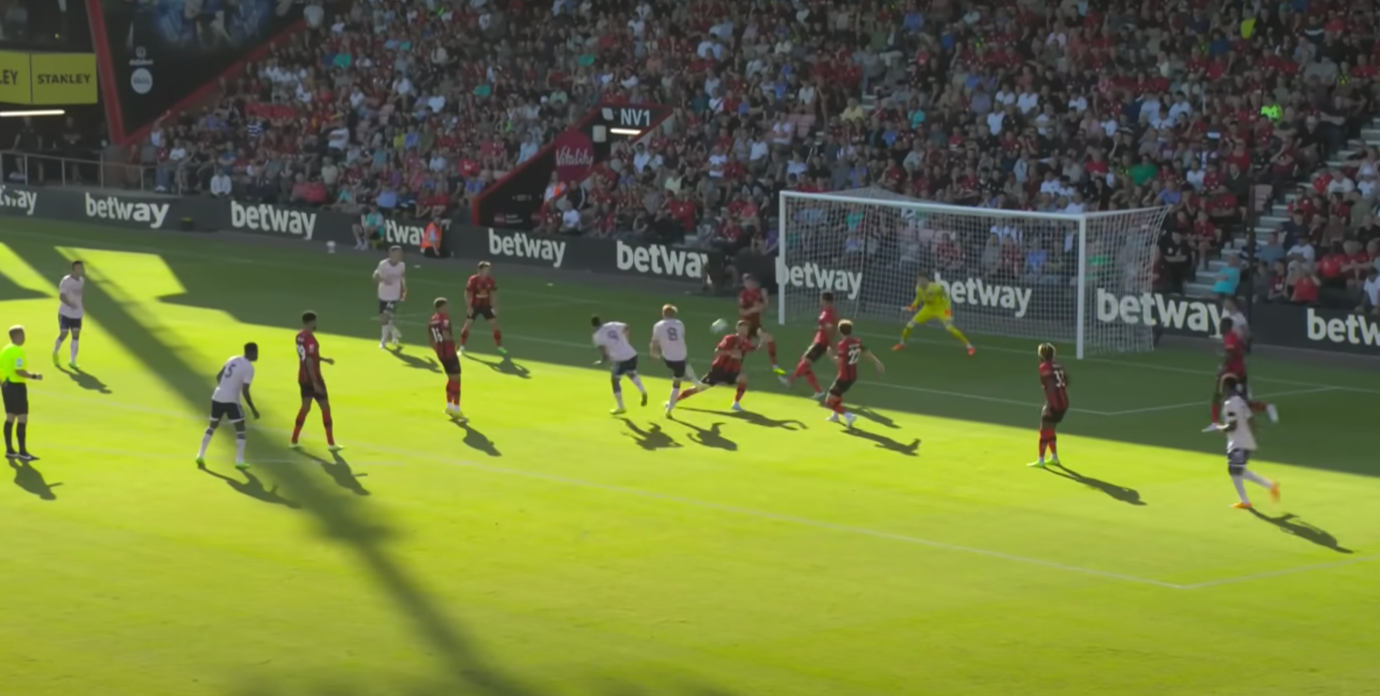 In the second half it was more of the same from Arsenal. Although Bournemouth managed to get six shots off, they failed to register a single touch in Arsenal’s box throughout the entire match which is a testament to the discipline of Mikel Arteta’s defence, something pundits have often ridiculed the likes of Arsene Wenger and Unai Emery’s sides for in days gone past. These openings came partially as a result of Jaidon Anthony being introduced in the second half for Bournemouth. The winger is very direct off the ball and offered an outlet that Moore hadn’t had the benefit of playing alongside for the first 45 minutes. While this allowed Bournemouth to stretch the pitch and register a few low xG shots, it was nothing Arsenal couldn’t deal with. Arsenal’s number one walked away from the stadium he used to call home with just one save made throughout the whole match.

A standout performer in the backline was William Saliba. On top of his goal, which he took with his weak foot like an experienced striker, his distribution was nothing short of faultless. He managed to complete all 73 of his attempted passes. 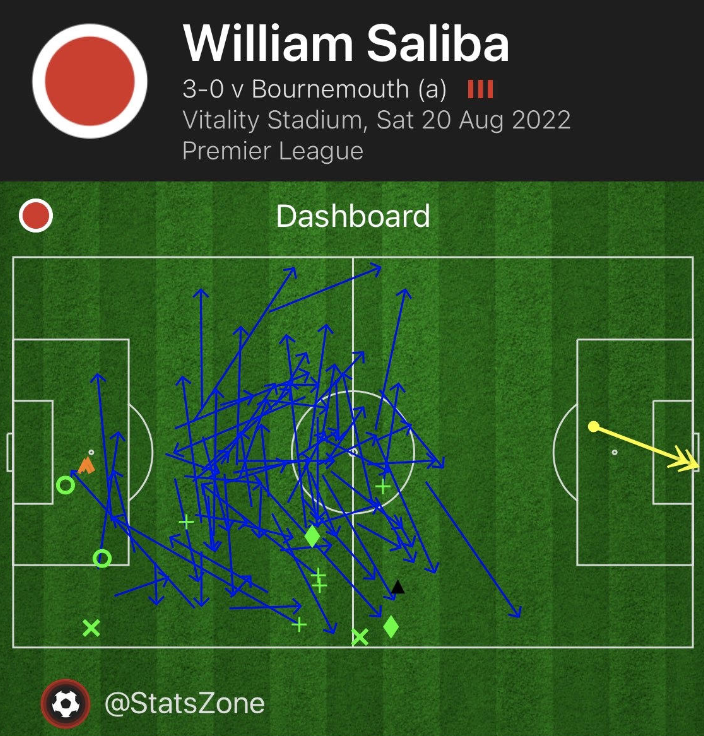 As shown by the diagram, he was very positive in his distribution, completing two long balls in the process and allowing Arsenal to move the ball quickly from side to side to create openings.

In this fixture, we saw the best of Arsenal, a dominant controlling game which was almost a formality from the midway point of the 2nd half. While there is not much to take away from this game tactically due to their almost flawless start, we saw how their new additions added individual quality to really take their game to the next level. It is clear the likes of White are warming to their new roles which will only help the team cohesion. It is certainly an exciting time to be an Arsenal fan.