This particular point has been mentioned by Arteta a fair amount of times. It emphasises his vision of the team to have many players filling in and rotating in different zones to help the team keep rhythm and open up different areas of the pitch. We’ve seen evidence of this in the player recruitment with Ben White and Takehiro Tomiyasu able to play across the back 4, Alex Zinchenko bring able to play as a hybrid LB and CM and Gabriel Jesus whilst being the focal point also adept at playing wide.

In Fabio Vieira however this concept is taken to another level which won’t just be useful in the case of injuries and depth, it’s an in game weapon with his varied skillset.

Fabio Vieira most predominantly has featured since coming through the academy at Porto as a number 10. He’s always been a player who links the deep midfield and the attack, this was shown most clearly at the U21 Euro Championship where he was Player of the Tournament. Vieira had the fourth most amount of touches for a player in that position during the tournament (averaged 78 per 90), the second highest touches in the attacking third (32 per 90). It further emphasises his ability to get on the ball to connect patterns together and in our set up at Arsenal shows how perfect he will be to help form those small triangles in those inside areas to help ball progression. His extra burst in short distances and his half turn capability make him perfect in receiving quickly in the spaces between the lines from where Arsenal have lots of variety in their combination play, he’s a fantastic carrier of the ball. The spaces he’s shown to operate best in are in those pockets on the inside right where he has a lethal left foot whether it’s to play a killer pass or shoot whenever there is an opportunity. 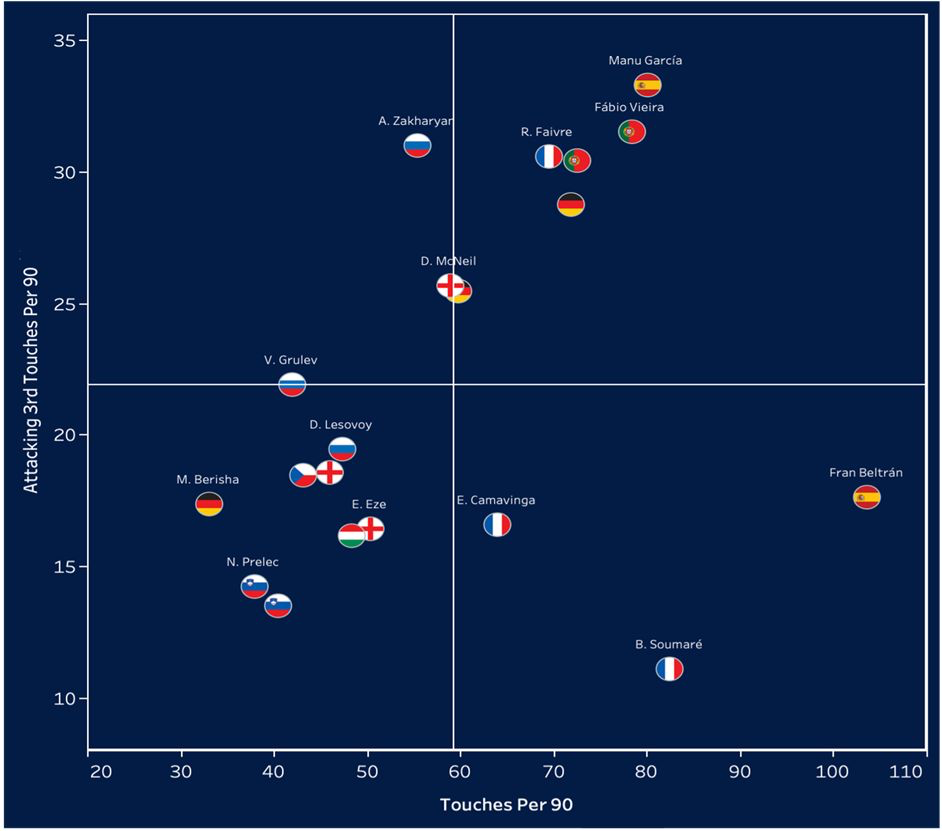 This is a player with extensively high efficiency and that’s shown from his statistics in second half of last season after the departure of Luis Diaz to Liverpool which allowed him more game time. 6 goals from 3.69 xG and 14 assists from 5.69 xG show this player is a killer in the final third which was an area of improvement for Arsenal going into the new season. Many games in and around the box Arsenal lacked the cutting edge with the final pass before the shot or the finish itself, Vieira comes in as a player who can contribute to help erasing the problem. Now you’re asking is this sustainable? In most cases probably not but Vieira has shown himself to be a “less volume and more output” player and the best attackers in the league have a tendency to over perform these metrics due to their great efficiency.

The right half space is where the likes of Kevin De Bruyne and Trent Alexander Arnold provide the difference for their teams with their amazing creativity, in particular in the form of the half space cross. It is arguably one of the deadliest moves in the sport if the quality can be executed and this has proven to be one of Vieira’s best qualities too. The difference with him to many however is Vieira can do that from the left side too and even more comfortably which means both Martinelli and Saka will definitely have lots of opportunities to attack the back post. Even more impressive is the fact Vieira can perform high quality actions like this with his weaker foot which is extremely rare in a left footed player. It’s a unique quality to find and that’s what makes this talent very special.

Arteta tends to like his deepest receivers be competent at receiving the ball on the half turn. This is partially a big reason why Thomas Partey has been used in the lone 6 role ahead of Granit Xhaka and even we saw Dani Ceballos pre and post lockdown receive the ball from the CBs. This is due to their ability to play at different angles more easily to help progress the ball in more varied ways without Arsenal being so under pressure to losing the ball in the press. With Vieira’s rare ability as a left footer to have not much angle bias at all, he’s a player who could easily drop in against pressure to help the build up. Everyone likes to compare Arteta and his experience as an assistant manager at Man City to see how the profiles match up, Vieira’s ability to form a spare man and turn in the first and second phase is something that can be compared. Pep uses Bernardo Silva at Manchester City in particular against the bigger teams away from home by forming that numerical superiority and relying on the quality of the player’s half turn and in carrying.

Having the same quality as this world class operator is a tough ask this early in to his career but it is a quality that Vieira has in his arsenal which is bound to develop as time passes. It will enable him to play in any emergency situation as a false 9 and more importantly can give a different option to Granit Xhaka as a left 8. Vieira’s retention and his angle bias allows him to also control tempo in that deeper role which is more of a position to be more risk averse. It again emphasises his unique versatility. He’s a player who evades pressure easily by sensing when a player will commit and then adjusts his body to take the ball on instead of waiting for the contact against another player. It could allow him to be the deepest receiver in situations and play at the tip of the wide triangles at Arsenal have whilst rotating. Its one of the reasons making him bulk up too much might not be a good idea as that agility is so crucial to the fluidity of his movements.

Vieira operating in left half space (credit to GunnerTV)

So the main question is where does he fit in for Arteta’s end game 433? The answer to that is almost anywhere from the midfield and attack. He has the retention to play as a left 8 despite some limitations off the ball when Arsenal defend in 442, he can be the deepest receiver on occasion due to his agility and technical quality. His best position as a right interior is very clear but due to his burst and ball striking he can easily play potentially across the front 3 as depth options on the inside (not necessarily on the touchline due to his inexperience in isolation situations). Most importantly due to his great work rate off the ball (shown by him having some of the highest counter pressing and final third recoveries in Portugal last season) makes his profile more than just a luxury option. As mentioned, he has the potential to be a trump card in almost every phase for this team against an opponent, whether its to kill a press or to break the game open with a great pass or lethal shot.

To finish off we must also call for patience for this player. Adaptation for a young player from a league outside the Europe’s top five (despite a high success rate from the league) to the fastest and most intense league in the world is extremely difficult in a quick space of time. However, if we give this player the time and allow him to develop at a steady rate, we could have the makings of an extremely special talent if things go according to plan.